Over the past several years, the University of Lynchburg men’s basketball team has seen its fair share of success but has also overcome adversity to get to where it is today.

The team has faced new teams which bring new challenges, they have seen players come and go but the one thing that has remained the forefront of this Lynchburg teams is the chemistry that has formed between the players and the staff.

Junior guard, Israel Lockamy, has explained the challenges the team has faced over the years. “The road hasn’t always been easy and we don’t expect it to be easy but our team’s chemistry is unmatched. Our staff and managers are a big part of this team and we are all in this together. Our hunger and determination is what drives us. I know we are going to have some rough days but it is part of the process to success. The goal is to take it one game at a time and improve on the improvements,” said Lockamy.

Each year Lynchburg is faced with new teams, new playcalls and new challenges. When looking at their stats from the past years to now it shows the team’s decrease in points per game. Even though there is more to the game than just scoring, when you are able to score a lot you have a great chance of winning. 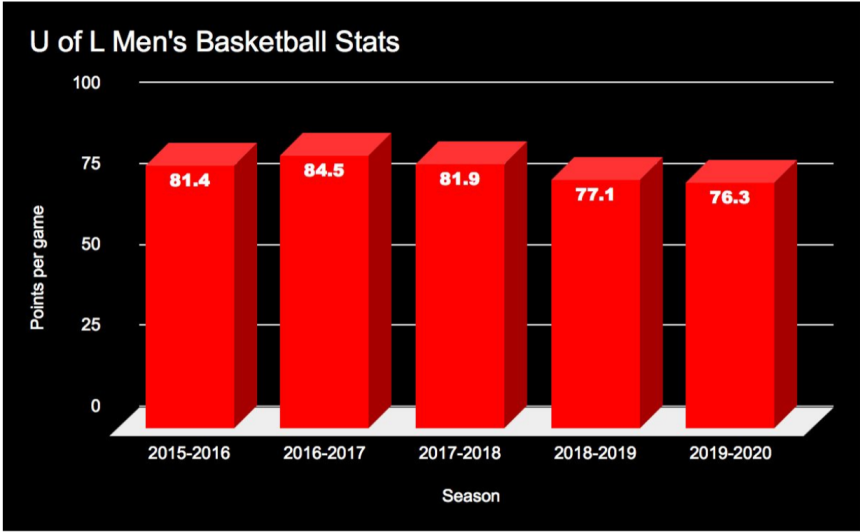 Graph of University of Lynchburg Men’s Basketball Statistics by season.

The graph shows that Lynchburg averaged 84.5 points per game in that season they were crowned Old Dominion Athletic Conference (ODAC) champions defeating Randolph during the 2016-17 season.

Manager, Holden Cash, has explained the team’s determination to get back to being crowned again. “The team chemistry is amazing. The guys are always helping one another whether it’s on and off the court. Of course every team has their downs but they take those as lessons rather than losses they’re a very determined and positive minded team. They know where they want to be by the end of the season and that’s to be named champions. So don’t expect anything less from us because we are going after that trophy. I may not be on the court playing but the team makes me feel part of it and I’m glad to part of this team,” said Cash.

It is evident that the bond the team shares has truly helped this team grow and become a better team.

Manager Carter Sadin, “I love this team; they know how important chemistry is and how it leads to success. They work hard and play together and being able to watch this and bond with them is truly special. Be on the look out for this team next season.”

Like Loading...
tagged with Life in the time of Corona, Lynchburg Basketball, Men's Basketball, University of Lynchburg