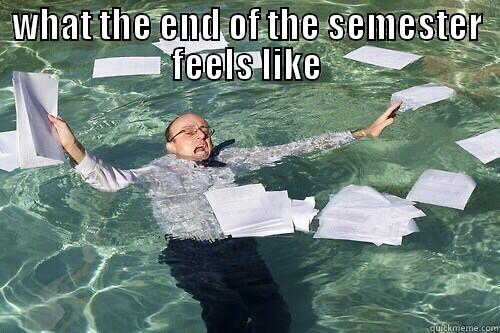 It is almost the end of the semester! We have a grand total of two weeks left before finals. That is two more Mondays, six more MWF classes, four more T/R classes… Less than 20 days until finals are over and winter break begins.

However, that week of finals does stand in the way between us students and the bliss of no classes for a month. It can feel like a slog over the next few weeks, some more than others, but I believe in all of us. We have been working for so long this semester to get to this point.

Look back on the path you have taken over the past few months. It has been a while, but it really has only been a little over 4 months. You have come so far! There is so much you have accomplished!

No matter how you look at it, there is a positive to find. Sure, you may have a boatload of work to do in the next two weeks. Personally, I have quite a few essays to write this week alone. But you cannot let that get you down.

Recently I was bemoaning the amount of things I had due to a friend that frequently does the same thing, but he finally told me that I had it in me to get it done. I had conquered harder mountains in past semesters, and I would get through this one too. It was quite a surprise, coming from him, because he was usually the one I was trying to convince that he could get over it, whatever was bothering him that week.

If it helps, just think that there are only two more weekends before you can relax and enjoy a day without schoolwork. I plan on attending another Self-Care Saturday with some friends of mine before finals. Get together with some people and do something you all enjoy, if only for an hour. Finals week is already miserable, so you might as well decompress before all that stress.

Regardless, if you have made it this far, you have already been through the hardest of it. Finals are just a few slightly longer tests than you are used to, if your professor has not assigned an essay instead. You have got this! We can do this! And once we are on the other side, we have a whole month to rest before the cycle starts all over again.