eSports on the Rise 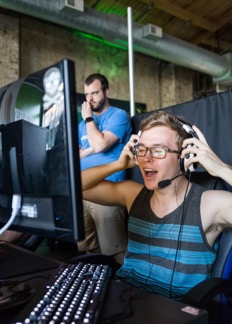 Picture sent in by Austin Fisher, senior and founder of eSports at the University of Lynchburg.

The world of competitive video gaming is now growing faster and larger than ever, and the University of Lynchburg has even begun its first eSports team this year.

Esports is a form of competition sports using video games. Competitors from different teams will go against each other and compete in the same games. Teams will compete in games that are popular with at-home gamers, such as Fortnite, League of Legends, Counter-Strike, Call of Duty, Overwatch and Madden NFL to name a few.

James Ryan, a junior and member of eSports, said, “What made me join eSports, was my love for video games. I have played video games ever since I could pick up a controller. When I saw the ad for the eSports team, I thought ‘you know it is a growing sport and there are a lot of people [who] can make a decent living off of video gaming,’ so it was the perfect opportunity to get to the level of gaming I hope to be at.”

According to a report from CNN, eSports players, like traditional athletes, can rake in big money. Tournaments usually possess millions of dollars in prize money, which is typically split between the players on the winning teams. The world’s top eSports players can easily earn seven figures in a year.

The eSports team at the University of Lynchburg has about 25 members but is expecting a lot more in the future once the details of the team are final.

Austin Fisher, a senior and the founder of eSports, said, “We are looking to get a team space such as a computer lab to play and practice on campus. I am confident once we have a space provided by the school more students will want to get involved, but many do not have the means to buy expensive gaming equipment.”

The number of eSports enthusiasts are booming and it is only going to grow, so if you are an avid video gamer check out the Esports club here on campus. For more information, you can email Ben Smith at smith_bt@lynchburg.edu or Austin Fisher at fisher_a@lynchburg.edu.

(Picture sent in by Austin Fisher, senior and founder of eSports at the University of Lynchburg.)

Austin Fisher, a senior at the University of Lynchburg and the founder of eSports, playing Counter-Strike at the Global Offensive tournament in Philadelphia 2018.