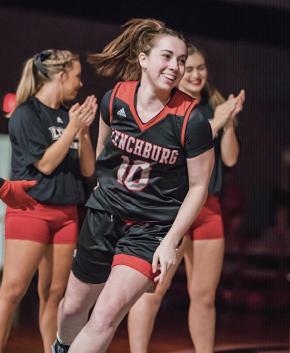 Delaney Fay
DAVIS, Reg. – University of Lynchburg’s “Hornet Midnight Madness” is back again, alerting the official start of the women’s basketball season, which will be Friday Oct.18, at the historic Turner Gymnasium.

The event will be the start of alumni weekend, in which fans and alumni will make their way back to campus for the whole weekend, as the University of Lynchburg women’s soccer team will host Roanoke, and the men’s team will host Eastern Mennonite Saturday, Oct. 19, the following day for homecoming. It will be three full days of demonstrating school spirit!

Maggie Quarles, a member of the women’s team, who saw 26 games last season as a starter and averaged 8.8 points per game for the Hornets, entailed that, “People should come to midnight madness and to support all of the hard work that we have put in. There is so much hard work from the players, coaches, and trainers that goes on behind the scenes, and supporting us makes it all worth it.” Maggie Quarles is entering her third year full of excitement for what is to come from the night and the rest of the season.

Hornet Midnight Madness will include music by the UofL pep band, routines from the school’s cheerleaders and dance team, tango by our very own Dr. Garren and his wife, video highlights from the school’s prestigious Lynchburg Hornet Sports Network [LHSN], coach and student-athlete introductions, scrimmages by the UofL women’s and men’s teams, a dunk contest, and much more.

Delaney Fay, another member of the women’s team who saw 11 games last year averaging 2.1 points per game for the women’s team, has had her freshman and sophomore seasons cut short after being sidelined by injury, but is looking forward to a full and healthy season, as she enters into her junior year.

She says that what she is looking most forward to, is “Being able to play and go through everything since I have not been able to in the past.”

Delaney is an elite scorer from the guard position who loves to get her team involved and cannot wait to showcase that this year’s midnight madness.

She hopes to see you there because in her words, “We are a fun group of gals […] and having people in the stands helps our confidence and energy so much.

View all posts by The Critograph

"I am apart of the Student Diversity Council. We organized the walk out and we have been working to fix the diversity and inclusion statement and it is going in the new University of Lynchburg student handbook. We are now planning different events, like showing screenings of Grown-ish and Black-ish in Westover to inform students on different issues. The council is in the works of maybe figuring out a way to do a podcast or news show where we would talk about different things going on on campus and what we can do to change it." Destiny, First Year at U of L #studentvoices #universityoflynchburg #critograph
Kick off your spring break by relaxing with some iced coffee and this week’s copy of the Crit! 🌥💐✨ #universityoflynchburg #critograph #springbreak
"I am a graduate student at the University of Lynchburg. The degree I am pursuing is educational leadership with a focus in higher education. I'm hoping to take that degree and serve students, either in administration or student development. I really enjoy U of L, I have some really amazing professors and classmates. Something that I think sets U of L apart is the amount of care and intentionality that the faculty and staff have for their students. In turn, I hope to use my degree to serve in the same way that they have for me". Eli Stewart, U of L Grad Student #studentvoices #universityoflynchburg #critograph
You do not want to miss this week’s issue of the Crit! Grab your free copy on campus today and read up on all the #campusbuzz ✨🗞🐝
“I’m a junior music education major from Appomattox, Virginia. I have been playing violin since I was three years old and consequently I perform in orchestra, chamber orchestra, string Quartet and solo performances. I’m the concert master of the orchestra. The concert we had this week, we are on the last performance of three. It’s western movies and the subsequent music from those movies so we’re doing Magnificent Seven, the Cowboys, we’re doing Annie Get Your Gun... we’re doing all of these movie tunes that you would recognize. It’s a lot of fun, we’ve been having a great time, everyone gets dressed up we get all rowdy. It’s great time for everyone involved    ” Colin Coviello #studentvoices #universityoflynchburg #critograph
This week’s Crit is out now!! Check out all the latest #campusbuzz 🗞🐝✨