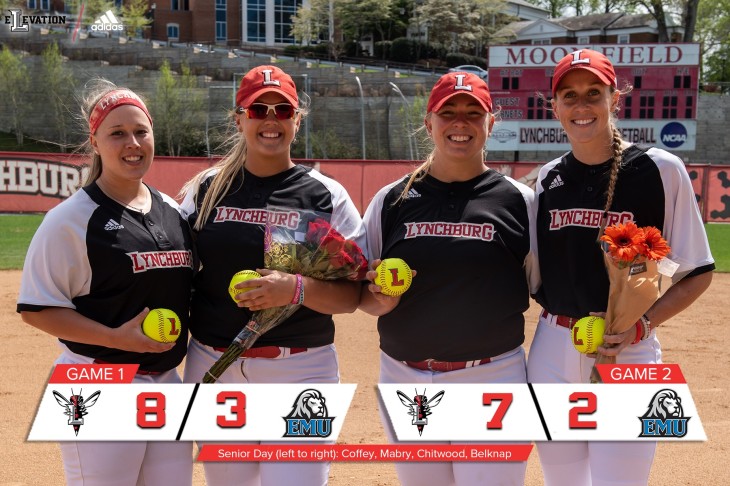 On Monday, April. 15, 2019, the 19th ranked University of Lynchburg softball team competed in their final home game matches of the regular season. On this senior day, the team competed in two back-to-back games against Eastern Mennonite University, another Old Dominion Athletic Conference (ODAC) team.  The seniors celebrated during this match from the Lady Hornet side were pitcher Taylor Belknap, infielder Taylor Mabry, infielder MacKenzie Chitwood, and catcher Brittany Coffey. The team defeated Eastern Mennonite University in both games by a score of 8 to 3 in the first game and a score of 7 to 2 in the second game.  The seniors really come out with intensity in these games and played a big part of their team win. Chitwood got four hits, scoring two home runs, and Mabry scored three times on the day.

“As we are preparing for the ODAC tournament, we are making sure our team chemistry is at an all time high so that we are all feeling good. I think our culture has helped us get to this point and I hope that us being a family drives us to going further,” says sophomore outfielder Kortney Leazer.

As a result of the ODAC Championships quickly approaching on Friday, April 26 at James I. Moyer Sports Complex in Salem, Va., the Lady Hornets team has been working primarily on fine-tuning their strategy and skill while simultaneously maintaining their team culture.

Belknap insists, “We have definitely experienced some adversity as we have moved into the later part of our season. But, we continue to stick together and do our best on a daily basis. Sometimes we have to remind ourselves to get back to having fun and our close knit culture makes this very easy to do. We are very excited as we move into the tournament and eager to play to the best of our ability.”

Please watch online or go support the University of Lynchburg Softball team as they travel away to compete against Emory & Henry University in a double-header match on Saturday, April  20, 2019. Game 1 will be at 2 p.m., and game 2 will be at 4 p.m. Then, be ready to go show support of our Lady Hornets in Salem, Va. on Friday, April 26 until Sunday, April 28 in the ODAC Tournament.