‘Tis the Season for Sports

Nov. 13 marked the first official day of the basketball season for the Lynchburg College’s men’s basketball team. Their season began as they faced off in an exhibition game against Norfolk State, a division I program. They defeated Norfolk 83-80 and set the bar high for not only their upcoming season but their competitors as well.

Building off their big win, LC went on a four game win streak. They did so by beating McDaniel College, St. Mary’s College and Ferrum College.

They played against McDaniel on Nov. 18, winning 78-68, and then faced St. Mary’s on Nov. 19, defeating them with a final score of 106-95. In these two games, multiple hornets found themselves scoring career highs. This included sophomore Chance Greene, who had a total of 17 points and junior Austin Wrighten, who led LC with 22 points. Both career highs were against McDaniel. Greene went on to surpass his recently-established career high against St. Mary’s with 21 points, while senior Connor Schroeder led the Hornets with 22 points. 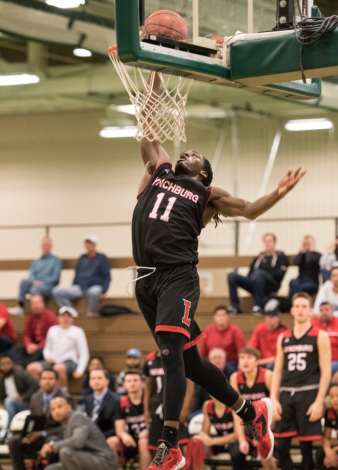 Next on the schedule was the home opener for the men’s team against Ferrum on Nov. 21. During that game, Greene surpassed his career high once again by leading the Hornets with 27 points, 12 of which were four back-to-back three-pointers. Those four three-pointers were assisted by junior Devante Young. LC went on to beat Ferrum 85-52 to earn their first win at home.

After the winning streak, the Hornets found themselves at a slight bump in the road when they played Methodist University at home on Nov. 25. Methodist beat LC 86-81 and gained most of their points off of free throws granted to them by LC fouls. Greene lead the Hornets with 21, Schroeder added in 10 points, Young added in 11 points and Wrighten produced eight points, seven rebounds and six assists.

The Hornets had a quick turn-around and faced Averett University away on Nov. 27. They lost 81-73 to Averett and Greene continued his streak of scoring 20 or more points by leading LC with 24 points in the loss.

Next up for the Hornets is Virginia Wesleyan, who they will play away on Nov. 29 at 7pm.